First of all - what great progress we've been making! We're grateful for all that our developers and participating beta testers are doing to help advance Ham Radio Deluxe.

The purpose of this email has to do with the goal behind our original message from 2 years ago. That is - the goal of our development efforts was to reduce the development backlog. In doing this, we would apply an 80/20 approach. That is - 80% bug fixes and 20% minor enhancements. That's pretty much what we've done.

Here are some stats from the last 2 years:

· 303 of 559 of these issues came off the development backlog

· An additional 232 items were investigated and closed without action

· 31 items were closed after re-testing

We can see the progress through the increasing numbers of customers installing Ham Radio Deluxe compared to the decreasing number of software failures and help tickets.

Over the past 30 days, the number of installations of Ham Radio Deluxe is up 11.5%. The green line approximates a trend-line that has been steadily increasing over the past several months. We're up to about 19,000 installs per week.

During this 30 day period, software failures have decreased about 65%. The green line approximates a trend-line that has been steadily decreasing over the past several months. For 19,000 installs per week, we generally see about 60 software failures. 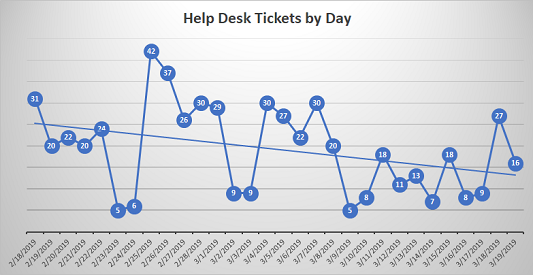 During the same 30 day period, help desk tickets have decreased about 48%. The blue line is the trend-line over this period. The trend has been steadily increasing over the past several months.

What Does All This Mean?

Here's the important take-away from all this.

In two years, we've solved 822 items from the development backlog across all the applications in the suite - Rig Control, Logbook, DM-780, Rotator, and Satellite Tracking. As a result, two things are happening. One - new Ham Radio Deluxe clients are increasing at a rate of about 20% per year. Thus, the number of installations per month is increasing. Meanwhile, the number of errors (reported back to Microsoft) is decreasing. And finally, the number of technical help requests to our tech support staff is decreasing. Bottom line - this data demonstrates that Ham Radio Deluxe is more stable than ever.

But we're not declaring victory and we're not slowing down.

What Are We Working On Now?

Development backlog - We're continuing to reduce the items in the development backlog. We'll continue the 80/20 approach. We've gone through all the major things. But the remaining items require quite a bit of investigation. Nonetheless, some of our releases have included 80 to 100 development items. We'll have at least one more 6.5 release before the following topic.

Software License Server - The 6.6 release will mark the migration away from our original (internally developed) license server and onto a commercial product from Soraco called QLM Pro. As quickly as we can, we will need to shut down the old license server - which enables folks to install versions prior to 6.6 with the old license keys. Stated another way - we'll need clients to move away from versions prior to 6.6.

Panadapter Display - Initially, we plan to offer a pan adapter display for capable ICOM radios. Then we'll move on to Kenwood and other devices like SDRPlay. (It's worth pointing out that not every radio has built-in capabilities for this. Some radios require external hardware - like the SDRPlay - connected to the radio's IF output. No software can create a panadapter display without either built-in capabilities or external hardware.)

As always, check out the Release Notes at https://ReleaseNotes.HamRadioDeluxe.com

We'll be at the following hamfests over the next couple months:

We hope to see you there!